The sky this morning was unbelievably beautiful!

The old saying is “Red sky at morning, shepherd’s warning!” Well, we may be in for some stormy weather today, if the sky is any indicator… 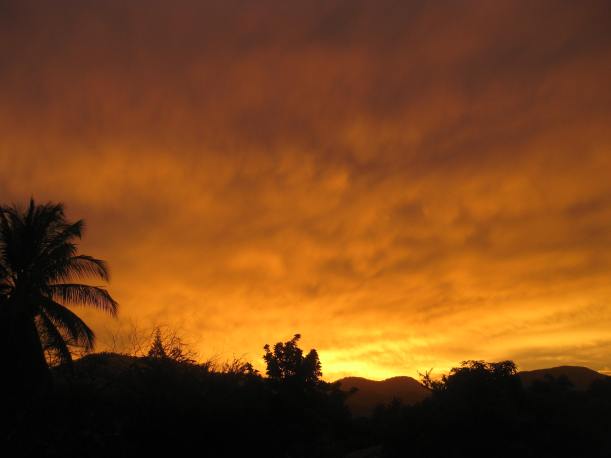 The  Meteorological Service issued a News Release on Wednesday:

A Surface Trough currently across Jamaica and the central Caribbean is expected to remain for the next three days and interact with a Stationary Front in the vicinity of the Bahamas.

Consequently, Jamaica will experience an increase in showers and thunderstorms which could be heavy at times especially across eastern parishes, tomorrow morning through Saturday.

What they left out of their release was:

Some stunningly beautiful sunrises are in the forecast over the next few days!

Article 1 of the Universal Declaration of Human Rights: All human beings are born free and equal in dignity and rights!

In Parliament yesterday, the Office of the Children’s Advocate’s (OCA) “Report on Investigations into the Conduct of the Child Development Agency Concerning Wards of the State: Sunshine Child Care Facility” was tabled by Minister of Youth and Culture, Lisa Hanna.

The investigation included a Hearing which resulted from the Children’s Advocate’s exercise of “her powers as a  Judge of the Supreme Court…pursuant to the provisions of the First Schedule to the Child Care and Protection Act.” (p 2) The issues to be determined were:

The details given in the report describe a complete mishandling of the matter by the CDA, a disturbing disregard for the well-being and rights of

the children and problematic responses on the part of some CDA personnel to the enquiries by the Children’s Advocate, Diahann Gordon Harrison.

One of the things that I found really troubling reading the report is that so many of the actions and attitudes described are not new. The specifics relate to a particular case, and having all occurred during this one case certainly merited focused investigation by the OCA and action regarding accountability and provisions for the affected children. But these types of actions and approaches by the CDA have been seen before, including:

There is far more that needs to be questioned about the matters raised within the OCA’s report and about the functioning of the CDA, an agency that has experienced many problems since its inception. I will be interested to see what comes of the task force that has been announced by Minister Hanna and is due to report on certain aspects of the child care and protection systems in February next year.

(The report is on Parliament’s website or is available here: OCA Report re CDA Conduct – Sunshine Child Care Facility Nov 2015.) 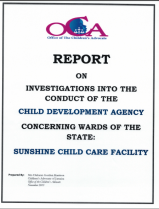 I don’t know about you, but I am fed up with the amount of time I seem to spend waiting on the phone to talk with customer service agents. Listening all the time to company jingles, promos for new services, or messages repeated ad nauseam telling me that I am a valued customer but no-one can talk to me just yet. Sometimes I’ve said in frustration that in the time I spend waiting on the phone, I could actually go to the company office to talk to someone!

One morning last week, that’s exactly what happened. I had gone to the bank to conduct a transaction, which I was able to do fairly quickly. I then headed to an office to carry out some business, which depended on the transaction I had just completed at the bank. While there, I realised that there was one detail I needed to clarify with the bank, before going ahead with what I needed to do at the office. So I decided to call the bank.

In the Yellow Pages, the numbers of the individual bank branches are no longer listed, only a central Customer Service number. I called it, and after pressing the various buttons as directed by the automated voice, I was on hold waiting , listening to the message telling me that all their customer service agents were busy, but that I would be dealt with as soon as one was available.

After waiting a while and getting more frustrated by the minute, I decided to get back into my car and drive back to the bank. I drove all the way back to the bank, with the earbud in my ear, listening to the automated message. I was actually walking through the parking lot when an agent finally answered. I informed him that I no longer needed his services, as I had driven back to the bank while waiting.