I heard the Commissioner of Police, Dr Carl Williams, being interviewed on Nationwide radio yesterday afternoon. During the interview, the Commissioner said that as of now, when people wear masks at political meetings, the masks will be removed by the police.

I would ask the Commissioner to clarify what provision in law the police would be acting on in doing so.

I am genuinely seeking an answer.

The Commissioner and other members of the JCF have been raising the concern about the practice of wearing masks to political meetings. The Commissioner said during the interview that people who wear masks are concealing their identities with the intention of committing criminal acts. (There was some irony to this, given long-standing complaints about the practice of some police of wearing masks during operations, effectively concealing their identities in instances of alleged police abuses.) Cliff Hughes, who was conducting the interview, later raised the possibility that those wearing masks were wanting to attend meetings of both parties without being identified.

Given the shooting on Sunday night during the JLP mass meeting in Sam Sharpe Square, in which two people were killed, a number of people were shot and injured and the safety of many more threatened, I can understand the desire of the police to increase security at political events. The Commissioner said that police investigations indicated that the incident wasn’t politically motivated, but was related to conflict between two gangs based in the Flankers community in MoBay. He has said that criminals would use any event as an opportunity to carry out their criminal actions.

It is one thing for the police to express their concerns; to encourage people not to wear masks to political meetings; to ask the political parties to get their supporters to desist from the practice; to seek a meeting with the Political Ombudsman to gain her support in having the practice banned.

It is another thing for the police to actually be removing masks, unless there is a power in law which provides for them to do so.

If the police have a reasonable suspicion that a masked person has committed a crime or is about to commit a crime, then the police can arrest the person and require the removal of the mask as part of the process of establishing the person’s identity. But other than that?

I hope Commissioner Williams will clarify.

(This does lead to a more general discussion about the extent of an individual’s right to cover their face in public, which in some countries has led to heated debate.)

I added a new morning ritual by chance this year. While sitting on the roof New Year’s Day, drinking a cup of mint tea, watching the sky lighten. I had taken a couple of books and my journal with me, as I often do. And I read aloud to myself the first poem in Lorna Goodison’s collection “Heartease” 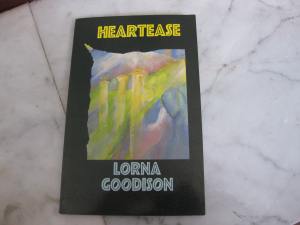 – “I Shall Light A Candle To Understanding In Thine Heart Which Shall Not Be Put Out” – a longtime favourite.

I enjoyed it so much that later in the day I decided to read a poem out loud to myself each morning. In January it was poems by Jamaican poets; this month it’s poems by African American poets. And I am having fun thinking of what my focus for future months might be: more Jamaican poets; Caribbean, African, Commonwealth poets; poems by women; poems translated into English; poems I first read in school; poems about love. The possibilities aren’t actually endless, though, as I am including only poems from books I own.

And just for fun, I tweet the title of the poem each day at #APoemADay and tweet a few lines from the poem @suezeecue. 140 characters from a poem can sometimes be hard to choose!

At the end of the year, I’ll see where #APoemADay has taken me….

By the illumination of that candle

exit, death and fear and doubt

within a lit heart, shining out.

The past few days have been significant ones for news about the Zika virus.

On Monday (Feb 1, 2016), the World Health Organization (WHO)  declared “that the recent cluster of microcephaly cases and other neurological disorders reported in Brazil, following a similar cluster in French Polynesia in 2014, constitutes a Public Health Emergency of International Concern.” (WHO Director-General Dr Margaret Chan’s statement) This decision was taken after the first meeting of the Emergency Committee which had been convened by the Director-General to look at these clusters in some areas now experiencing outbreaks of Zika virus. (WHO statement on 1st meeting of International Health Regulations Committee on Zika virus)

A Case of Sexually Transmitted Zika in Texas

Then yesterday came the headline-catching news from Dallas that the Centres for Disease Control (CDC) had confirmed a case of Zika virus infection which had been sexually transmitted. The Dallas County Health and Human Services (DCHHS) sent out a press release about the case. DCHHS Press Release re Sexually Transmitted Case of Zika Virus. A case of sexually transmitted Zika virus was recorded in 2008, but no cases during the current epidemic. (Listen to a 2011 CDC podcast about the 2008 case in Colorado.) Though the main mode of infection remains via the Aedes aegypti mosquito, this new case in Dallas does add another dimension to the current epidemic.

Yesterday (Feb2, 2016) in Jamaica the Ministry of Health (MOH) held a press briefing, to update the country about the first confirmed case of Zika virus, which it had informed the public of last Saturday. Five Government Ministers addressed the briefing on aspects of the Government’s actions and plans regarding the Zika outbreak. Also in attendance were some Members of Parliament and Mayors, the MOH Permanent Secretary, the new Chief Medical Officer and a number of other government personnel.

The video of the press conference is posted online, with the Minister of Health’s comments about the first confirmed case and subsequent actions taken by his Ministry running from 10:37 – 16:46 of the video.

Among the things that Minister Dalley mentioned were that:

The presentations were followed by a question and answer session with journalists.

Prime Minister Simpson Miller made a national broadcast regarding the preparations to reduce the impact of the Zika virus (video).

At 5:30 that evening, the University of the West Indies (UWI) Faculty of Medical Sciences in collaboration with PAHO/WHO and the MOH held a Public Symposium entitled “Zika Virus Update”. It is a pity that this symposium wasn’t broadcast or recorded, as it was an excellent session, with very informative presentations and a robust question and answer session. 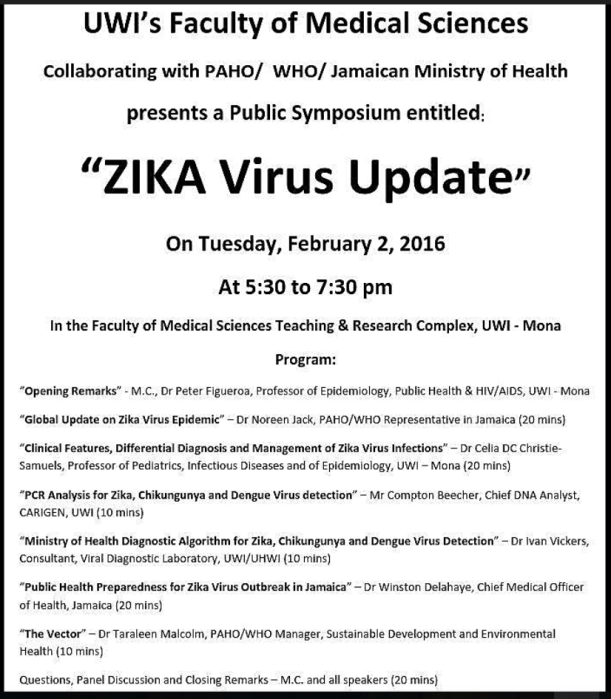 The focus of this symposium was obviously different from that of the MOH press briefing in the morning and a great deal of medical and scientific information was given and issues explored. It was particularly useful to have information given about the Jamaican context for the Zika outbreak and the issues arising out of that context. I found Professor Christie’s presentation of particular interest, raising as it did issues about the seriousness of the situation being faced regarding our ability to deal with an increase in cases of children born with possibly severe microcephaly.

A few other issues that came up during the symposium:

Repeatedly the point was made regarding how much is not yet known about the Zika virus and the possible complications associated with this generally mild to moderate disease. The need for further and ongoing research was stressed, but as Professor Figueroa said, in public health, you need to take the best of what you know and act on it; you can’t tell patients to wait on the results of a study.

There is a need for more opportunities for professionals to share information of this kind regarding Zika, and to be able to answer questions and engage in discussions with members of the public. These opportunities mustn’t be scripted and limited, but must allow for the open exchange of information and for frank discussion. A wide range of options exists for sharing such information and they must be used.