It is clear from the video that the police think the man they are throwing into the back of their pickup is already dead. Their disregard is graphically captured, as are the distressed wails and shouts from some of the people witnessing what is happening. The police drive off quickly, once the back of the pickup is secured.

The Independent Commission of Investigation (INDECOM) released the following statement by its Commissioner Terrence Williams on May 27, regarding recent incidents in which the police have shown a lack of respect in their treatment of bodies of people allegedly killed by the police:

The Independent Commission of Investigations (INDECOM) notes the recent circulation of a video within public media fora, which records members of the Jamaica Constabulary Force (JCF) handling the apparent lifeless body of Mr. John Hibbert on May 17, 2016 following his alleged fatal shooting by JCF officers. The video shows police officers throwing Mr. Hibbert into the back of a JCF service vehicle.

What is both disturbing and unacceptable is the manner in which the body of Mr. Hibbert is ‘flung’ into the back of the vehicle with absolutely no regard or sense of ‘humanity’ for him. All citizens, irrespective of what they have allegedly done, or who they may be, are entitled to be treated with a measure of respect.

The removal of the deceased from any crime scene, whether by police officers, ambulance service or mortuary officials is deserving of a level of professionalism, dignity and respect, both for the dead and for those family members and friends who are often present.

State Agents are not qualified medical personnel and they cannot formally pronounce persons as dead. They are required to always treat a victim as injured until pronounced dead by a qualified person. Hence, in all cases, a measure of urgency is to be employed when treating with injured persons. The JCF has very clear guidelines within their own ‘Human Rights and Use of Force Policy’ which directs, ‘… that assistance and medical aid are rendered to any injured or affected persons at the earliest possible moment’. [Section 57(3)]. This video provides no evidence of this prescribed approach.

The Commission has observed a recent trend in which photographs and videos are circulated on social media platforms following security force-related fatal shootings. Photographs recently posted on the internet concerned two fatal shootings on the 12th and 13th of April 2016.

The photographs show the clearest evidence of a dead person, taken in circumstances in which it is more than reasonable to assume were recorded by State Agents or permitted by them, but in which it was reported that the injured persons were “rushed to hospital.” Such photographic evidence provides a contradictory account to there being any ‘injured’ person or any urgency in being ‘rushed to hospital’. Such photography eliminates the credibility of such statements.

The current video and recent uploading of pictures of people killed by the security forces is observed both nationally and internationally across the World Wide Web, and does little to enhance the reputation of the Jamaican police service. The Commission has received comments and complaints and we urge State Agents to ensure they act, at all times, with the utmost professionalism and demonstrate the due respect for citizens and the families of these dead or injured men.

As the Indian Union Home Minister Rajneth Singh recently commented, following a death in which paramilitary forces were involved, “…as a civilized society it is a common gesture that the dead body of a person be treated with utmost respect and dignity…”

The INDECOM Commissioner raises concerns about

Some of these are concerns that have been expressed over many years.

Williams points out that the police, not being medical personnel, are not able formally to pronounce someone dead. This is the reason the police routinely give for not leaving bodies in place at scenes of police killings to enable police photographers or forensic teams to examine bodies where they fell. They say they must take the person to a hospital, as they can’t presume that the person is dead.

In principle, this is a valid reason. Yet often the way the person is handled (as in the video referred to by INDECOM) or the lack of urgency in taking the person to the medical facility shows clearly that the police have already pronounced that him done dead already. If not, they would be handling an injured person in a way which would be a gross dereliction of their duty, according to their own “Human Rights and Use of Force Policy”.

There have been many accounts over decades of police throwing people – dead or still alive – into trunks of police cars or the back of other vehicles, for the journey to the hospital. And many accounts of delays in taking them to hospital.

One such instance comes to mind, that of Basil Brown, shot by a policeman on February 17, 2003, across the road from Andrews Memorial Hospital, at the corner of Kingsway Avenue and Hope Road. Witnesses at the scene said that Mr Brown was alive when he was lifted into a van and that nurses who had observed the incident were calling for him to be brought into the hospital. That request was ignored and he was taken instead to the University Hospital some distance away. However, instead of taking the most direct route – straight up Hope Road towards Papine, they set off along Kingsway Avenue, and by the time they arrived at University Hospital, Mr Brown was dead.

In March 2003, Amnesty International published a report titled “Jamaica: The killing of the Braeton Seven – A justice system on trial”. This was after the conclusion of the Coroner’s Inquest into the deaths of the seven youths killed by police in a house in Braeton, St Catherine, on March 14, 2001.

A section in the report deals with the delay in removal of the bodies:

Removal of the bodies

The positioning of dead bodies, blood trails and other evidence can give vital information as to how an individual was killed. Yet the police moved the bodies of the seven before any officer independent of the killings had an opportunity to examine or record their positions. The police later justified their action on the grounds that they had taken the youths to receive medical attention. However, police evidence to the Coroner’s Court suggested that the bodies were left for some time before being taken to hospital. In his original statement to investigators, Senior Superintendent of Police Adams said that the “injured persons” were removed between 4.45 and 5.15am. All the statements made by police officers suggest that the incident was over by around 5am, with references to the “injured” men being “rushed” or “immediately taken” to hospital. One police driver said in his statement that he was instructed to take the men to hospital at approximately 5.30am. 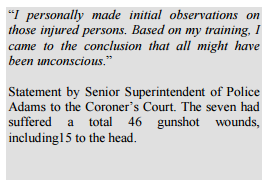 However, there is clearly a discrepancy of around 40 minutes or longer in the time of departure from Braeton and arrival at the hospital. The men were not documented as arriving at the hospital until approximately 6.20am. A statement by another police driver clearly suggested a delay before they were taken to hospital: “I heard loud explosions that sounded like gunshot, this lasted for some time. About an hour later I was instructed by SSP [Senior Superintendent of Police] Adams…to take them [three of the seven] to hospital.” Another police driver testified before the Coroner’s Court that a journey from Braeton to Spanish Town Public Hospital, in a police car with the sirens on, took 10 minutes at that time of day. Television journalist Michael Pryce told the Court that the police took some time to remove the bodies and that they were loaded into police jeeps “between 6.10 and 6.25/6.30am”.

It is clear from the statements given by various sources, including numerous police officers, that the dead men were not taken to hospital immediately following the incident. In the unlikely event that the men were not dead, the police would have been derelict in their duty for allowing them to die without prompt medical treatment. However, the more likely scenario is that the seven were obviously dead, given the severity of their wounds, and that the police therefore knew medical treatment was not required. In such an event, the appropriate action for the police would have been to leave the bodies wherever they fell, for the investigators to photograph and collect forensic information. (pp 11-12)

(Six policemen were later charged with murder in the Braeton Seven case, but were acquitted at trial in February 2005.)

In the INDECOM release, Commissioner Williams speaks about an erosion in credibility of police accounts of rushing injured people to hospital. He speaks about damage to the reputation of the Jamaica Constabulary Force (JCF) locally and internationally. He speaks about the need for the police to act with professionalism and respect. He is correct.

Will Police Commissioner Carl Williams have anything to say on this matter?

4 thoughts on “Him Done Dead Already: Police Handling of Bodies After Fatal Shootings”