This is the second weekend in a row that I have spent some time reading through a Bill recently tabled in the Parliament. This time it was the National Identification and Registration Act, 2017, tabled by Prime Minister Holness during his Budget Debate contribution in March. 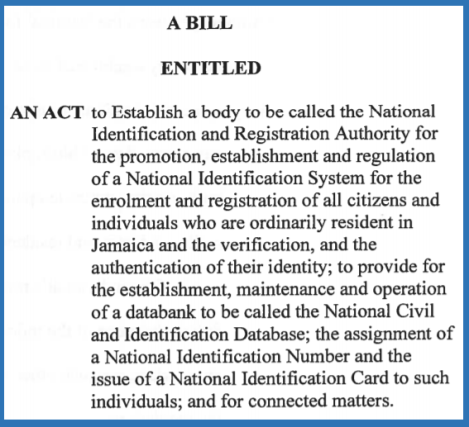 This Bill is consistent with a rights-based approach to ensuring that every citizen of Jamaica can be identified and known to the state, so that their rights and entitlements can be preserved and planned for in advance. This will create a tremendous public good by reducing transaction time and cost.

Mr. Speaker, the Registrar General Department will be transformed into the National Identification and Registration Authority and will be responsible for implementing the project. Funding for the project is being negotiated through the IDB and a detailed work plan is already prepared. We expect to be piloting the project in September next year.

Having read through the Bill, I certainly think that it needs to be considered by a Joint Select Committee to benefit from “the closer scrutiny of the Parliament”, as PM Holness said in relation to the Law Reform (Zones of Special Operations) (Special Security and Community Development Measures) Act.

The Act will establish the National and Civil Identification Database and will empower the Government to collect a variety of biographic and biometric information about each citizen of Jamaica and other individuals who are ordinarily resident in Jamaica. The range of information is set out in the Third Schedule of the Act:

This isn’t even the final list, as the definitions of both “biographic information” and “biometric information” in the Interpretation section of the Act allow for additional data to be included in the Regulations, by referring respectively to “and such other information as may be specified in the regulations” & “or such other biological attribute of the individual as may be specified in the regulations”. The Regulations referred to haven’t yet been drafted or made public, so there is no way of knowing at this point what they might include in the first instance or in the future. (In fact, in more than a dozen places in the Bill, further details are relegated to the Regulations, in some instances leaving me feeling that the country is being asked to sign a contract now and find out the details later. With the devil so often lying in the details, perhaps the Regulations need to be brought to Parliament alongside the Bill or the details need to be included in the Bill itself.)

It is also important to note that Section 58 of the Act gives the power to the designated Minister (who is the Prime Minister in this Act) to amend Schedules:

So at some point in the future, a Prime Minister could decide to amend the Third Schedule to include DNA as one of the biometric identifiers the Government would have the power to collect from every Jamaican citizen for storage in the database.

But without going to future possibilities, a look at the existing list includes items that need to be deleted. For example, A 9. The religion of the individual. Why would it be necessary for the Jamaican Government to inquire into, collect, record and store in a permanent database the religion of every citizen of Jamaica? Other items among the biographical information need to be similarly questioned.

The biometric information is of particular concern, as one can hardly get more intrusive of a person’s privacy than to collect such data. Each of those items from A 22 – 33 needs to be carefully reconsidered. The Government will seek to reassure that the data will be secured and protected and only accessed under certain circumstances. I think it needs to be questioned whether by the simple fact of your being born in Jamaica, an act in which you have no choice whatsoever, the Government should have the power in law to collect all this biometric information from you.

There are other aspects of the Bill that need to be carefully considered and I plan to do further posts on this. At the core of the legislation, however, is the information the Government intends to collect about each citizen and so this is a good place to begin.

4 thoughts on “Does the National Identification & Registration Act Go Too Far?”