Whether or not the construction going on in Barbican Square will bring the promised benefits is not the subject of this blog post. What I want to consider is whether the situation I saw last week Thursday night and Friday afternoon is indicative of government that values the safety and well-being of its citizens.

The Barbican Road Improvement Project has been going on for many months now. This release from Jamaica Information Service (JIS) in March last year described the scope of the planned work and indicated the timeframe for some of the phases. It included the following advice from Manager for Communication and Customer Services at the National Works Agency (NWA), Stephen Shaw:

Mr. Shaw urges persons to exercise caution as they traverse that area.

“There will be difficulties and challenges while the project is ongoing, but it will be for a greater good; and so, we are asking persons to work with us as we work to complete what we are hoping to be a very successful project,” he says.

In the ensuing months, there has been much comment about the ongoing roadworks in both traditional and social media and I have seen numerous photos posted online by fellow blogger Dennis Jones documenting various problems he has seen.

This image from Google maps shows the area and roads involved. East King’s House Road is marked with an arrow and the numbers indicate some points I will mention as I go along. 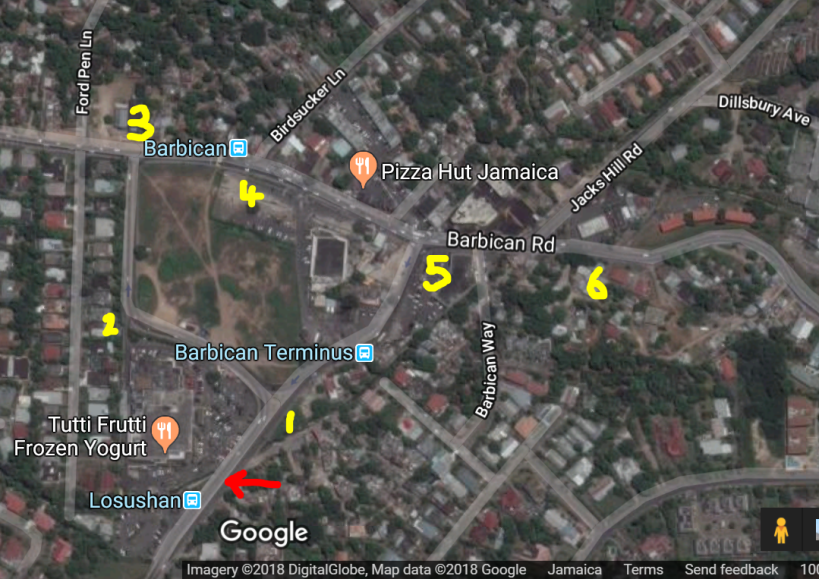 Barbican Square is not a route that I have to use routinely and with the ongoing construction I have consciously avoided the area. So when I had to use the route last Thursday night to access somewhere via Birdsucker Lane, I did so with a sense of unease. I had seen something about the closure of Birdsucker Lane, but had paid little attention to the timeline for it and wondered if it was still closed. I assumed that if it were, there would be some signs indicating the appropriate detour. I discovered that Birdsucker was open, but the absence of any proper signage or safety precautions was appalling. When I eventually reached home, I tweeted about the experience. 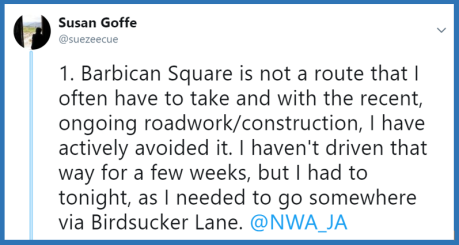 I approached the area via the East Kings’s House Road route, joined the usual lines of traffic going past Loshusan plaza, taking the right lane, as I normally would to head for Birdsucker. I saw a police car parked across the road from the exit (at 2 on map) from the plaza, obviously trying to discourage the usual boring that takes place just before the concrete median barriers at that point. There were no signs at the intersection of the roundabout road with Barbican Road (at 3 on map). In fact, I saw no signs directing traffic at any point in the roundabout area that night.

The situation I mentioned in tweet #3 was along the stretch labeled 6 on the map.

The woman with the small child I mentioned in tweet #4 was approaching the Jack’s Hill intersection, coming from the direction of the Square.

I was really troubled by my experience on Thursday night and wanted to see what the situation looked like during daylight, so I went back on Friday afternoon and spent about an hour walking around the area. What I saw confirmed my impression that there is a disregard for the safety of those who have to traverse the area either by car or on foot.

Along the stretch labeled 6 on the map, there were some barriers in evidence where an excavator and some men were working. However, further along the stretch there was nothing marking the edge of the trench being dug, to highlight the danger for motorists. 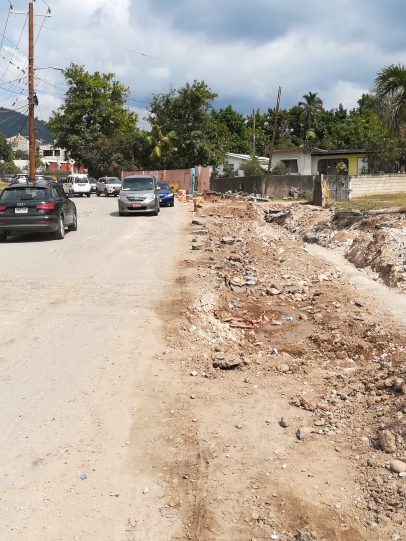 There were no signs to direct traffic flow at the intersections of Barbican Road with the roundabout road (3 on the map), with Birdsucker Lane (4 on the map) or East King’s House Road (5 on the map). There seemed to be a reliance on a few barriers and luck.

The only sign I saw directing traffic flow in the area of the Square was on East King’s House Road, near the Losushan traffic lights. And even that wasn’t very clearly placed. And nowhere did I see any flag men or women helping to guide drivers.

The hazards to pedestrians were many….uneven surfaces, with exposed unfinished construction and holes… 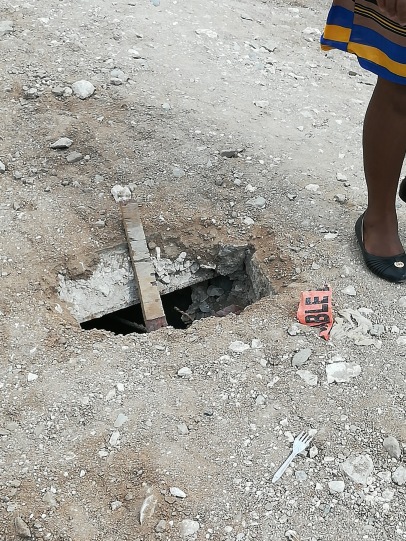 …sidewalks under construction which end abruptly and have uncovered holes, with no attempt to place warnings for pedestrians…

…protruding steel, with no covering and nothing to warn of its presence…

…a drain hole in a sidewalk, with a makeshift and inadequate covering.

The government has a duty to protect people when construction is taking place on the public thoroughfares. Are there regulations, protocols, guidelines, standards governing such safety measures to protect users of the spaces during such construction? If so, what are those guidelines? Are they being met? Are they included in contracts being issued? What are the monitoring responsibilities of the NWA? Is the NWA satisfied with the safety provisions in Barbican Square roadworks?

These issues have been raised before, quite recently with an accident on Mandela Highway in which lives were lost. New roadworks have begun in Constant Spring and are promised for Hagley Park Road. But clear answers do not seem to be readily forthcoming. On Friday morning I made an Access to Information request to the NWA for “written regulations/guidelines/protocols/requirements for the provision of warnings/ precautions/etc during road work/construction/repairs.” Today I had an acknowledgement of my request. I will share any information I receive.

5 thoughts on “Barbican Square Roadworks: An Example of Government Disregard for People’s Safety”