Polls opened at 7:00am. Party leaders Portia Simpson Miller and Andrew Holness were among the more than 870,000 voters who went to polling stations to cast their ballots on Election Day. 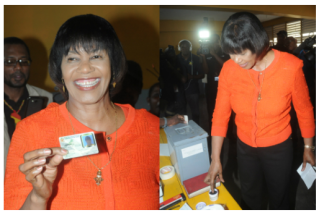 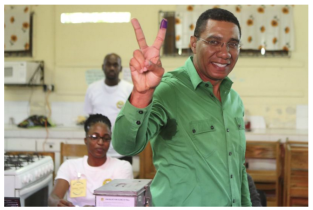 I was one of many who posted photos of their inked fingers online. 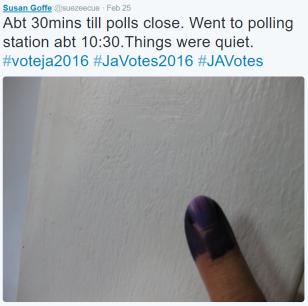 After the polls closed at 5:00pm, the counting began, as did the monitoring and discussions on radio, television and social media. And later that night, the Preliminary Count by the Electoral Office of Jamaica (EOJ) showed that the JLP had  won the election with 33 seats, to the PNP’s 30. 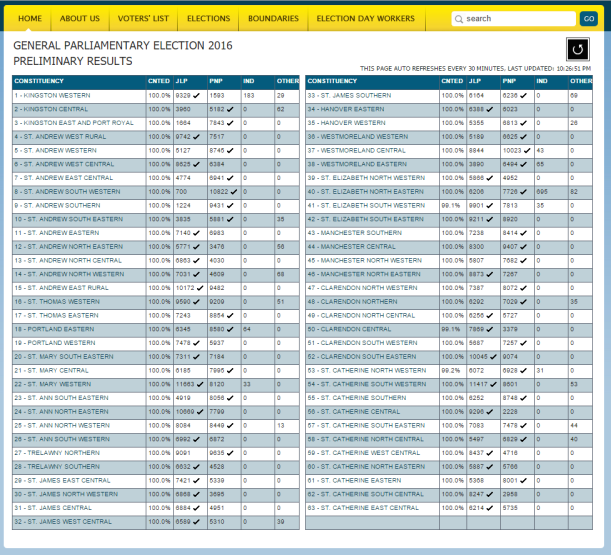 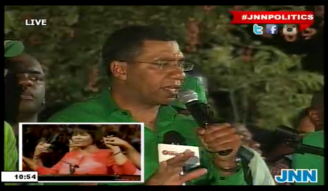 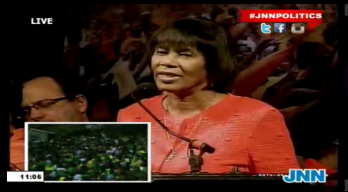 Among those celebrating at JLP Headquarters on Belmont Road was former PM & JLP leader Edward Seaga. 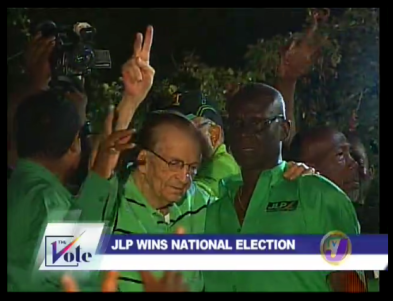 Final counting for all constituencies across the island commenced, with counting taking place in the designated counting centres in each constituency except for five – St Andrew Eastern, St Ann South Western, St Mary South Eastern and St Catherine North Eastern which were being counted at the Head Office at Duke Street Kingston; and St James Southern which was being counted at the Regional Office in Montego Bay. 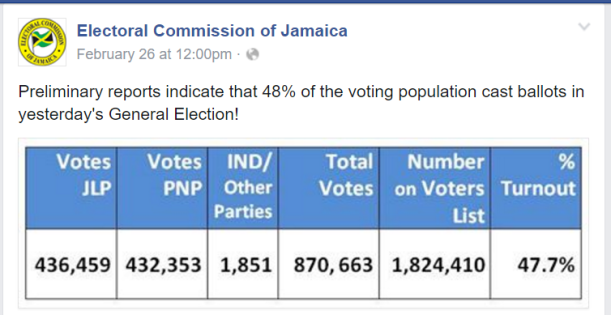 Figures released based on the Preliminary Count indicated that the % voter turnout was the lowest for a General Election in Jamaica’s electoral history. (Except for 1983, when the PNP didn’t contest the election.) 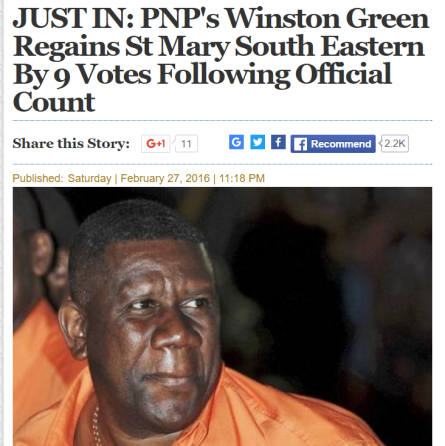 Rumours and speculation increased. At one point in the day, a rumour spread that the JLP had lost another seat during the recount, but this was not so. PM Simpson Miller and Dr Horace Chang both issued statements amid the increasing tension. 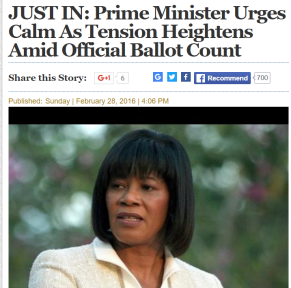 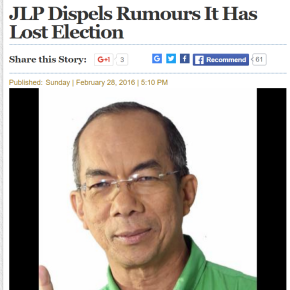 Director of Elections, Orrette Fisher made the decision to move another constituency recount to the Head Office in Kingston, and this was done with the security forces escorting the ballot boxes from St Thomas to Kingston. 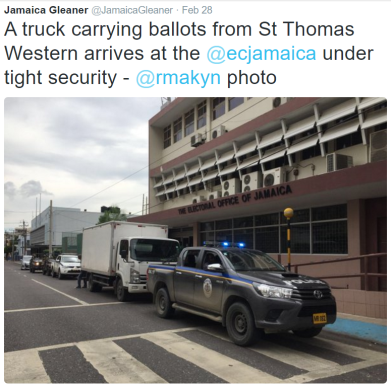 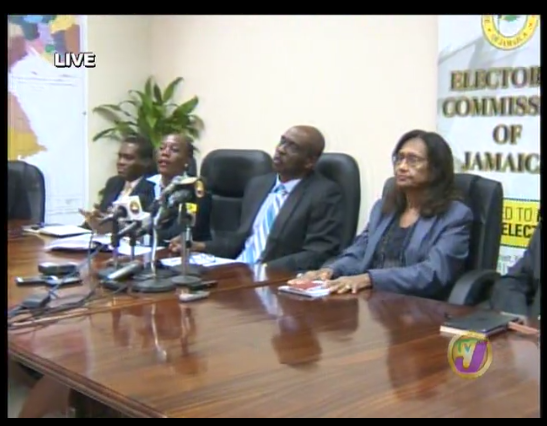 The ECJ confirmed the Final Count and the outcome of the election, and indicated that the results would be sent to the Governor General. The results represented the narrowest majority in seat count for a General Election in Jamaica.

The official announcement came that the swearing-in of Andrew Holness as Prime Minister would take place the following day. 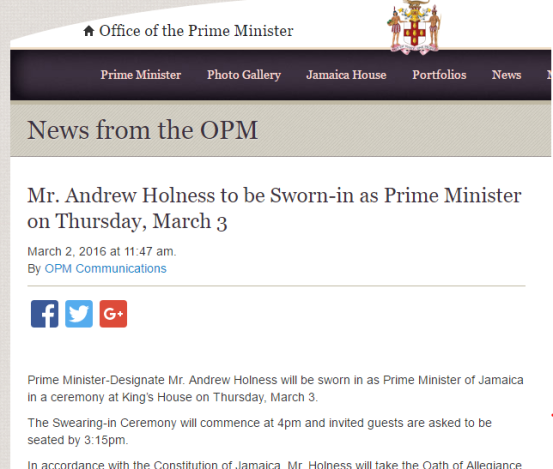 The Governor General, Sir Patrick Allen , presided over the ceremony held at King’s House, at which Andrew Holness took the Oath of Allegiance and the Oath of Office and became  Prime Minister of Jamaica. PM Holness then delivered his inaugural address. 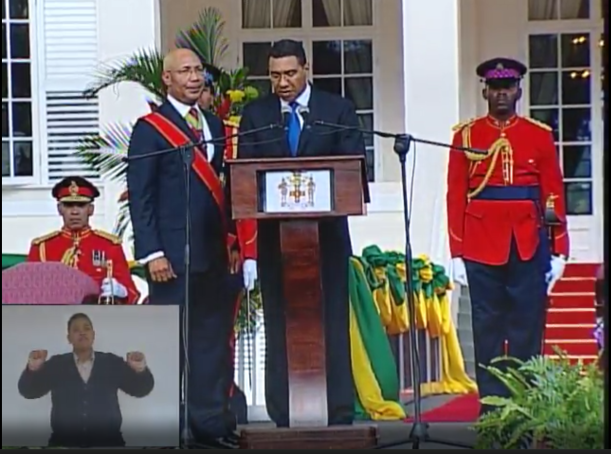 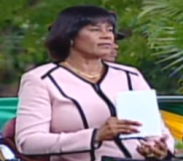 There were a number of musical items during the ceremony, but perhaps the highlight was the performance by Nesbeth, who sang his song My Dream, which had been used by the JLP during the campaign. The new PM joined him in singing. 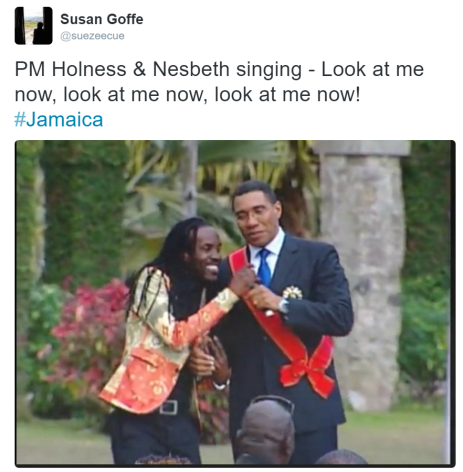 As they say, a week is a long time in politics….